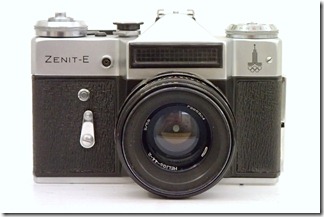 In the 60s, the Krasnogorsk Mechanical Plant adhered to the concept of two parallel lines of cameras.

One line was supposed to consist of high-end cameras for professionals, the other – from simpler and cheaper models – for the mass consumer.
In 1965, as professional cameras, KMZ has already mastered the production of cameras with central shutters based on Zenit-4.

This segment already had a successful model – Zenit-3M.

This camera was very good, and even went well for export. But Zenit-3M still had a number of shortcomings, with which it was decided to fight.

Firstly, the new camera had to receive a descending constant sight mirror. It was a breakthrough, since until now ALL Soviet DSLRs, including high-end ones, had a sticky mirror.

This segment already had a successful model – Zenit-3M.

This camera was very good, and even went well for export. But Zenit-3M still had a number of shortcomings, with which it was decided to fight.

Firstly, the new camera had to receive a descending constant sight mirror. It was a breakthrough, since until now all Soviet DSLRs, including high-end ones, had a sticky mirror.

And these two radical improvements were about to be applied to the mass camera.

For the rest, we decided not to be smart and leave the time-tested solutions. This is how Zenit-E appeared.

Zenit-E is a very interesting camera without a doubt. It is with great pleasure and respect that I proceed to review it.

The Zenit-E camera began to be produced at KMZ in 1965. And it turned out to be so successful that it was produced at this enterprise for 17 years right up to 1982.

Over the years, KMZ has produced 3.3 million copies!

But that’s not all.

The demand for Zenit-E (including abroad) was so great that since 1973 the production of the same Zenith-E was additionally deployed at the enterprise of the Belarusian Optical and Mechanical Association (BelOMO) in Vileika Belarus.

The total production of Zenit-E for all years at both enterprises amounted to 8 million copies.

The letter “E” in the name of the device means “Exponometer”.

Over the years of production, Zenit-E has undergone some structural changes. In fact, the cameras of the first and last years of release are quite different cameras.

I will now describe the camera from the 80th year of release. This version with the emblem of the Olympics, now, perhaps, is most associated with the Zenit-E brand.

Interestingly, the first Zenit-E models were produced with a mount inherited from Zenit-3M: with an M39 × 1 thread and a 45.2 mm flange.

This mount was a purely Soviet standard, which created many difficulties with compatibility with foreign equipment.

Therefore, the management of the KMZ made a very correct decision and the mount on the Zenith-E was promptly changed to the GDR standard Kontaks M42 × 1 with a working distance of 45.5 mm.

This immediately achieved a lot of positive results:
– the export potential of the camera increased;
– the M42 × 1 mount was more suitable for creating high-aperture optics, and soon a large assortment of good high-aperture lenses was created in the USSR;
– optics from neighboring countries began to approach our cameras.

By modern standards, exposure is not enough, of course, but let’s not forget that the 64th was the most popular film in the USSR. With this sensitivity, shutter speeds shorter than 1/500 are generally of little use.

And the benefits of shutter speeds longer than 1/30 are also not obvious. I remember very rarely used these, although my FED-5V had them.

In general, for the overwhelming number of fans of those years, the set was actually optimal.

The early Zenith-E’s flash mount was removable. Then they stopped making it removable. The central synchrocontact was never installed on Zenit-E. Was only wired.

The camera is equipped with a self-timer.

The weight of my camera without the lens is 700 grams. 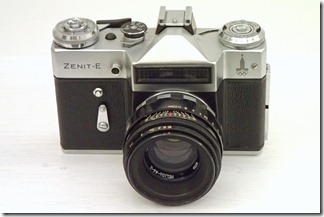 Above the Zenit-E lens is a selenium photocell light detector.

Previously, optics were produced in light aluminum housings. White lens housings reflected sky light and blinded the light meter. To avoid this, the lenses were permanently changed to black.

On the right of the front panel there is a winding lever and a self-timer start button. 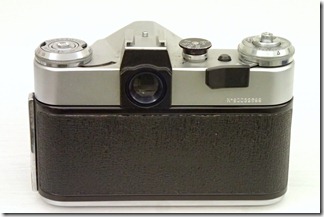 Behind – only the viewfinder eyepiece.

Zenita-E viewfinder covers only 65% of the frame area. This is very small. As far as I know, this is a kind of anti-record.

Visually, the Zenita-E viewfinder produces a picture much less than, for example, Zenit-3M. Nevertheless, its viewfinder is much lighter against the same Zenit-12SD.

Focusing is on frosted glass. What kind of wedges are there … .. But very clearly. It is psychologically easier to place the subject off-center, which has a positive effect on the composition.

And most importantly – the image in the viewfinder is now always present – both when the shutter is cocked and when it is released. For me, this is a major improvement. 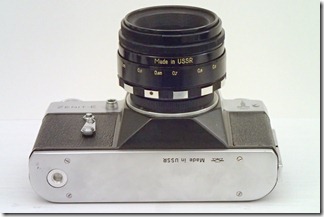 Bottom – only tripod socket. It is maximally shifted to the right. This is not a very convenient solution. 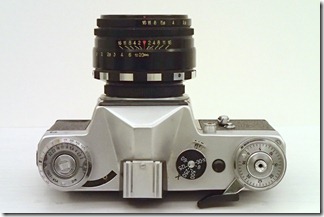 Above at Zenith-E, from left to right are: 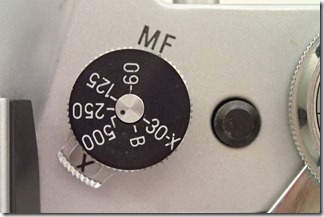 To change the shutter speed, the corresponding head must be pulled up, turned to the desired value and released. 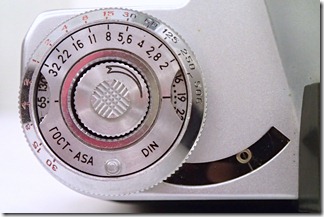 The calculation of the exposure at Zenit-E is as follows:

2. Next, we aim the device at the object of photography. There is a recommendation to tilt the device forward a little so that the exposure meter captures the sky a little less.

Depending on the illumination of the object in the arched window, a thin arrow will take one or another position.

3. Rotate the outer ring of the calculator to catch the thin arrow in the ring.

4. When the arrow is caught, the shutter speeds and apertures are lined up opposite each other in the front of the calculator on the outer and inner rings. Any pair is a true expo pair.

5. The light meter on the Zenith-E is not conjugated. For example, Zenit-4 had a coupled exposure meter, which means that at the moment when the exposure is calculated, the shooting parameters have already been entered into the camera and you can take pictures immediately.

In the case of Zenit-E, after calculating the exposure, you need to do one more operation – set the shutter speed and aperture on the camera controls. 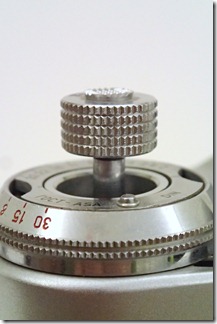 The rewind knob is hidden in the center of the exposure calculator. To remove it, you need to press on its end with your finger and turn it counterclockwise. After that, the spring will slightly push the head out of the camera body and further into the working position you need to pull it out with your fingers. 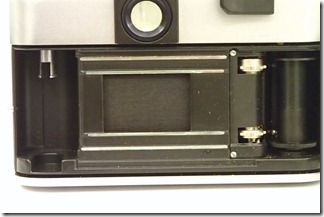 The back cover of the Zenith-E is hinged. The lock is located on the left side of the camera.

Inside, everything is more typical.

Attitude towards the camera

Zenit-E is a legendary camera. If you set yourself the goal of finding the camera-face of the Soviet photo, it will be, without any doubt, Zenit-E.

Yes, there were cameras that were much more sophisticated. But few of them were released, so that not everyone even knows about their existence.

And Zenit-E allowed millions of Soviet citizens to take excellent photographs. The device was produced for decades, and then served people for decades.

During high school, when I was the proud owner of Smena-8M, the Zenit-E camera seemed to me just the height of perfection. The exposure calculator at that time was just the same example of nano-technology.

I don’t know how anyone, but I have great respect for this unassuming camera to this day.

If you have a Zenit-E camera and there is a lens on it, you can use this lens on your digital camera. Both on mirrored and mirrorless. Full frame and crop.

Look for your lens in the table of contents of my site, maybe there are some subtleties that are worth knowing.

But in any case, you will need an adapter for your photo system.

The cheapest adapters are sold on Aliexpress.

My table will help you choose an adapter for your camera.